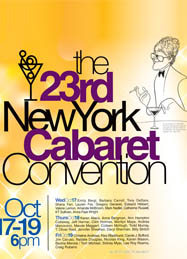 “The real thing: you know it when you see it…The way her voice, with its blues inflections, cut a swath, leaving nothing standing, tempts me to describe her with groveling hyperbole as an earthier, more acerbic 21st-century Barbra Streisand. The songs may be old, but Ms. Bufford transformed them into utterly contemporary expressions of a woman defiantly making her way without apologies.”
-Stephen Holden, THE NEW YORK TIMES

“The evening ended with, arguably, two young performers who, if there is any justice, should break out to national stardom…Carole J. Bufford closed the show with riveting performances of “House of the Rising Sun” and “Can’t Help Lovin’ Dat Man.” Bufford gives just enough theatricality to bring excitement to a performance, without an ounce of falseness. Likewise, her incredible, blues-belting voice and large, longing eyes, combine to bring conviction to everything she does. She is already one of the greats.”
-Kevin Scott Hall, Bistroawards.com

“Among the new generation of stars, Carole Bufford was a show-stealer sending shivers through the theater with “House of the Rising Sun” and “Can’t Help Loving That Man of Mine.””
-William Wolf, Wolfentertainmentguide.com

“The adorable Carole J. Bufford was stunning in both her form-fitting silver evening gown and on her rendition of “What Did I Have That I Don’t Have” (from On a Clear Day You Can See Forever)…”
-Stephen Hanks, Broadwayworld.com

“Nurturing young talent, of course, is essential to the genre’s survival. Carole Bufford, a folk-blues singer who delivered strong pop-slanted renditions of Johnny Cash and Bessie Smith songs, suggest[s] that the talent is there waiting to be harvested.”- Stephen Holden, New York Times

“Bufford wowed the audience with her ability to handle the blues in grand style, saying she was inspired by a youngster listening to recordings by Bessie Smith. We’ll surely be hearing more about her.” – William Wolf, Wolf Entertainment Guide.com

“New to many listeners was Carole Bufford. The singer, whom some of us saw develop and dig into her blues…in this summer’s MetroStar talent search at the Metropolitan Room, repeated two of the songs she worked on there. They were the perhaps odd but arresting choice of “Folsom Prison Blues,” and the oldie complaint, “Nobody Knows You When You’re Down and Out,” with her big voice wailing through the hall. Nice work and very poised!”- Rob Lester, Cabaret Exchange.com