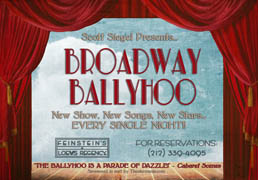 “…Carole J. Bufford, the youngest and most vivacious of the red-hot mamas…”
-Will Friedwald, The Wall Street Journal

“One of my cabaret favorites, Carole J. Bufford, lit up the program with her customary impact, singing first the sexy “Blame It on the Summer Night” and the hot, provocative Bessie Smith number “Kitchen Man,” which came with a story. Bufford recalled hearing it sung when she was in high school, and her English teacher suggested that she ought to sing that song. (Now that’s the kind of a teacher to have.) Bufford returned later to show her consummate skills as she powerfully delivered “Can’t Help Lovin’ That Man of Mine” and “After You’ve Gone,” the second so scorching that it would make any guy think twice before walking out on Bufford.”
– William Wolf, Wolfentertainmentguide.com

Speaking of stage presence, popular Carole J. Bufford, a petite powerhouse, delved into those ‘Folsom Prison Blues.’ (This song squeezes into Siegel’s Broadway theme via its connection to Million Dollar Quartet). Bufford showed how to work a cabaret audience with, “You’ve Been a Good Old Wagon but You’ve Done Broke Down.” She commented that this was written in 1896 by Ben Harney and John Biller but Bufford chose to deliver Bessie Smith’s female spin on the tune recorded decades later.
-Elizabeth Ahlfors, Curtainup.com

“Last, and certainly not least, is the exciting new face, Carole J. Bufford. She apologized upon realizing that all three of her solos found her stationary at a mic stand. No caveat was necessary. All three songs were sung by characters of questionable social status: a convict, “Folsom Prison Blues” (a Broadway song by dint of its inclusion in Million Dollar Quartet – a questionable justification but I wouldn’t have discounted Bufford’s rendition for anything), a streetwalker, the hysterical “Torch” (Face the Music) and a fallen woman, a version of “Can’t Help Lovin’ Dat Man of Mine,” that had much of the audience wanting to rush out and finance a revival of Showboat to be built around her.”
-Bart Greenberg, Nitelifeexchange.com