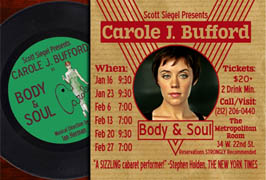 “If an award for “most likely to succeed” was up for grabs among the younger generation of New York cabaret performers, Carole J. Bufford would be high on the list of contenders. A doll-faced latter-day flapper with a broad sense of humor, Ms. Bufford radiates the unflappable (excuse the pun) confidence of a woman comfortable exerting power.”
-STEPHEN HOLDEN, THE NEW YORK TIMES

“Those who were there to witness her UK debut will forever be able to dine out on being the first to catch a rising star so gifted that the New York Times called her “an earthier, more acerbic, 21st century Streisand”. For me, rather more Liza than Barbra, but it matters not, because one day Carole Judith Bufford will be up there with both. You read it here first.”
-Jeremy Chapman, MusicalTheatreReview.com, UK

“With a touch of the gamine, the slight star was clothed in a chic black dress with a solitary sparkling diamante clip, and revealed a voice that made one tingle at its vibrant emotion, its stunning power and faultless interpretation.”
-Tom Vallance, ClassicalSource.com, UK

“I have to believe that a reviewer feels the biggest buzz when he or she has been fortunate enough to observe a young performer’s ascent into stardom. That’s the way I felt last Wednesday night at the Metropolitan Room as I was watching Carole J. Bufford’s new show, Body & Soul.”
Stephen Hanks, BroadwayWorld.com

“For her audiences, life and joy begin anew when they hear her sing”
David Roberts, Theatre Reviews Limited

“The difference between enjoying a good nightclub singer and being completely enthralled by an exceptional cabaret artist can easily be recognized as Carole J. Bufford displays the interpretive skills, stage savvy and snazzy audience rapport that stirs buzz and excitement…”
Michael Dale, BroadwayWorld.com

“At home on the stage, Carole Bufford is consistently graceful and often luminous. She brings glamour back to a genre in which it’s sorely lacking.”
Alix Cohen, WomanAroundTown.com

“Bufford is like fireworks on the fourth of July”
Paulanne Simmons, Nytheatre-wire.com

“Don’t miss Bufford. She is a showstopper and a true force of nature.”
Danielle Miceli, NewYorkCabaretToday.com

“The new show shows off Ms. Bufford at her emotionally draining best. Ms. Bufford, who is the winner of 2013 Nightlife award for best female vocalist, is glamorously dressed and now looks every inch the chanteuse.”
Ron Forman, CorinesCorner.com

“It was an exhilarating experience, and I came away eagerly pondering just how deservedly far this very special singer will go in the wide world of show business.”
William Wolf, Wolf Entertainment Guide

“Some things, like talent and charisma, you’ve either got or you don’t got. And Bufford’s got.”
-Ben Walters, Nottelevision.net, UK